Oh, when I look back now
That summer seemed to last forever
And if I had the choice
Yeah, I’d always wanna be there
Those were the best days of my life

August is now upon us and I felt like it’s been a bit and wanted a beach day so here I am checking out Baja Shore, one of the many parts of the Baja sim community. I have done scenes at Baja Norte before so I wanted to try something different and go to one of the other “installations” as I would call them to see what kind of image I could pull together.

With summer being one of my favorite seasons I decided to stick with that theme and this could have made a perfect post for a Throwback Thursday, I didn’t want to wait on it or forget the idea I had. Once I arrived at Baja Shore and looked around I found my spot almost instantly with the old caddy with towels and various items inside of it that screamed summer fun.

Bakaboo has not released many products as of late due to the busy nature of creator, Ocean Blackthorne, but at this past Swank event (which I missed the cut of posting this before the end of the round by a nose hair) the latest release for men is a colorful jersey type tanktop and shorts. Sold separately these matching clothes are not only attention grabbers but have a perfect fit and I give high praise to Ocean for rigging for mesh bodies (a first for me since officially blogging for the brand). I knew that I picked a winner with this outfit and trip to the beach, this scene was going to turn out well.

To compliment my outfit I have on the latest sneakers from Native Urban. The “Revealed” sneakers have a very casual and comfortable look for every day wear and could also be used for running for those of you on the grid with an active lifestyle. The All Colors pack has customization that will have you wearing a different style for any occasion or outfit choice.

Now that you know about my outfit I can get to the new things that I have for the face/body which are both from Modulus.

The hair I have on is from the recent round of the Man Cave which still has a week left of opening, it’s a combed back look that will have guys looking as suave as they possibly can. The “Preston” hair style is 100% mesh and a part of the Modulus Alpha next gen hair line. With a hairstyle like this I felt that maybe I should have thrown in a pair of shades to give my look an extra cool effect but I think either way I feel pretty stylish.

The beginning of August brings us all sorts of events that are starting new rounds with all new products as well as the return of the Mesh Body Addicts Fair which combines mesh heads, bodies, skins, clothing and accessories (including shapes) to give guys and gals new choices to upgrade their appearance for customize it slightly to help them feel more like how they want to represent themselves on the grid.

Modulus is also a contributing brand to the event and have two different facial hair styles and a set of eyebrows for sale. For this look I am wearing the “Goatee” style which reminds me a little bit of the style I personally have in the real world. Facial hair is something that I try not to live without so 3/4 of my looks have me wearing facial hair of some type whether it’s closely shaved or a really thick beard, I tend to do it all in that respect.

I’ve always enjoyed the different types of facial hair that Modulus creates (and it’s not often that Chucky does so this makes it one of those special occasions). It could be said that I’ve been down since day one as I owned all of the facial hair that were made under the Fruk banner which were later brought back for a small moment through Modulus.

There are a lot more things to cover in the next week or so and I can’t wait to share them with you as products from The Men Jail come through as well as more from the Mesh Boddy Addicts Fair. There are some creative poses from Image Essentials that I can’t wait to try my hand at creating a scene with as well as The Men’s Department opening up at the beginning of next week.

That about wraps it up for this blog post but this was definitely a lot of fun but the planning never ends so until our paths cross again, onto the next conversation…

So here we go, Here I am
Its not for me or for them
‘Cause we forgive and forget
And then we do it again

When there are so many different events with more than a handful of items I want to take home with me or sometimes in my case I might happen to be a blogger for the event and have so much to choose from because it is all so good the reality is that time wise I’m not going to be able to make posts for every single item during the event so I’ll have to pick and choose what products feature in a photo (or photos) for a blog post.

However, no matter what the show always must continue and I’ve got more coverage of Pose Fair for you! This event which is now quarterly instead of just a singular month during the year is continuing to be a juggernaut for those who are big into blogging and photography and need things to help fuel their creativeness. I can tell you that the things I’ve discovered from the event have really given me quite a bit of a boost.

X.T.C Poses has a rather nice male pose set to accompany the two female sets they have up for sale at Pose Fair, “Giovanni” is something I consider to be a good set and I knew right away what I wanted to do with it once I unpacked it. I think that overall the full frame shot I captured was exactly what I envisioned when I was putting the scene together. 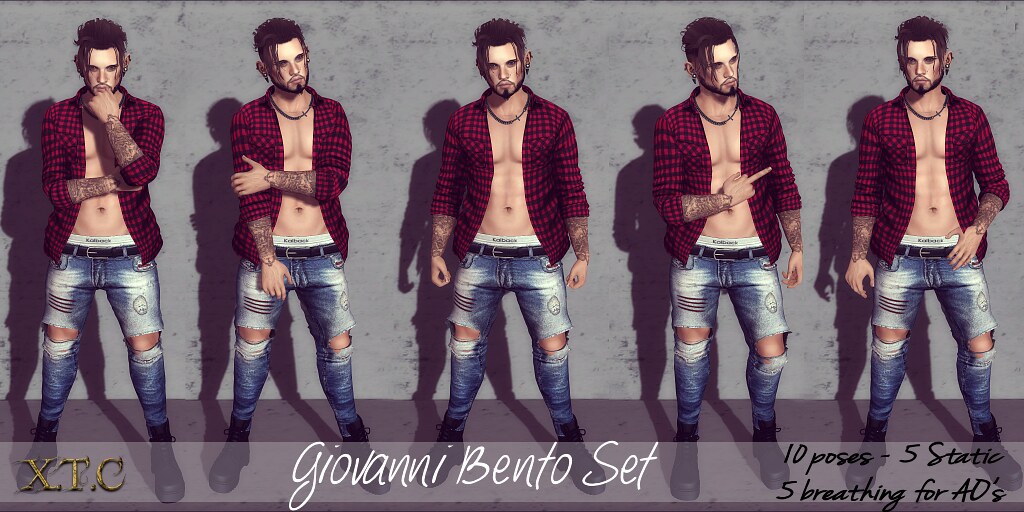 It’s only been a few days now since The Men Jail paroled it’s July round to the public and there are a lot of great items at the event that I’m pretty excited about using in my photos and one of them is the [LOB] Running Shirt (which yes it is more like a tanktop but we’re not really keeping score are we?) This tank fit so perfectly with the HOLLOWAY jeans from {Cold-Ash} from my last post (which I am wearing in another denim color). With the lighting I chose to use I decided to stray away from wearing the black version of the tank and went with the gray (I would say heather gray but again who is keeping score) so the details of it could be seen more clearly.

I also like that I coordinated my outfit to have jeans and a shirt that had strategic rips in them to make them a bit similar; I thought it was a good idea to go for as well with the soundtrack of the blog as well considering that one of the themes to it is destruction. Makes the most sense to me at least where that’s concerned.

In this blog I’m featuring a recent hair that was originally released at last months Man Cave but with some real world things I got a little bit behind and missed covering it while it was at the event but I really like the hair and want to make sure that those who may not have been able to get to the event while it was there have another opportunity to get it now that it has been moved to the mainstore as a release.

The “Dalton Hair” is a nice shorter side-combed style that really works as a summer cut because it’s not super long and you can easily shave the back and sides of your head (ie shaved hairbase ofc) and it will still look fantastic. For the time being I returned to darker tones of hair and can’t specifically say I have a reason why it just seems to fit at the moment and that’s the great thing about being able to change from one moment to the next is that perhaps for my next photo I can sport another color. Modulus has added several of the recent event items that have lapsed into their store and marketplace so check them out after you finish reading this blog entry (or you can always tab out and come back because I’m totally cool with that!)

Before I get to the next thing that I’m putting a spotlight on in this blog, I’d like to take a moment to thank the creator of Paparazzi (maker of fine backdrops), Drew Sunflower. I’ve had several interactions with him over the last month or so and personally I think he’s a great person. Not that I’m trying to say that all creators aren’t but there are some that seem to go over and beyond to show appreciation to the people who blog their products that may not blog for them specifically so kudos to you for being one heck of a person. With that said it’s a good way to segue into the next and last spotlight of this blog.

Equal10 is now open for the July round and I haven’t had much of a chance to take a look at all of what’s up for sale but I did see a small handful of things that I’m going to have to take a trip there to give a closer look to. Aside from that, Paparazzi has released a really cool backdrop called “Metropolis Bridge” that really blew me away. The construction and the overall feel of this kind of put me in that sort of Bladerunner mixed in with a future possible Tokyo vibe. I really can’t get over the detail and if I don’t cut myself off I’d never stop talking about it.

This post also contains other items from The Men Jail but instead of talking about them now I plan to feature them in perhaps my next post where they’ll get their own coverage with a more up front view so that I can promote them properly as they should and because I feel they are good products it’s the best way for me to be able to do that.

There is also more Pose Fair for me to attack so hopefully readers stick around for that (I hope you do for sure!) as well as more from The Men Jail and I’m sure I will mix it up with other great items as well from Modulus, Native Urban, Go&See and plenty of others. I’ve also heard that Vista will be releasing their first bento male head soon which is super exciting and I definitely would love to give coverage to that upon its release.