Fall Out Boy, ♫Fourth Of July♫

As I sit down to write out this blog most people might have a sparkler in their hand and or a beverage of their choice celebrating America’s day of independence. It has a lot of meaning and also different meanings to people here in the US and beyond the parties and family get together’s, it means that we are a free country but with that freedom our nation has paid many prices for that. So before I get into the rest of this posting, I’d like to thank all the people that have served our country past, present, or in the near future and also to the families of those whose loved ones lost their lives defending all the beliefs we stand upon. Being able to live without complete fear or terror is something that none of us should ever take for granted.

Now that I am done with the super serious part of this post I can get into the actual blog itself and the scene I shot. The other day I was talking with one of my longtime friends and they suggested that I do a photo around this time using the song “Fourth Of July” by Fall Out Boy for a soundtrack. I couldn’t quite remember the song so I went back and listened to it and some ideas came through my head as to how I could do it and going through some of my event items and other purchases I pulled together a cool scene that I was able to do right in my own home without having to go find a location.

While I am hitting the Pose Fair super hard right now I am featuring another gacha set but this time from [Phantom Animations] whose items I have blogged in the past from a different event. The set is called “Just A Selfie” and as the name implies offers poses which include a phone as if you are taking or looking at photos on it; I was able to use the pose without having to adjust my shape for it which is sometimes necessary.

Also here is the Gacha key for those of you who are interested in the rest of the set! 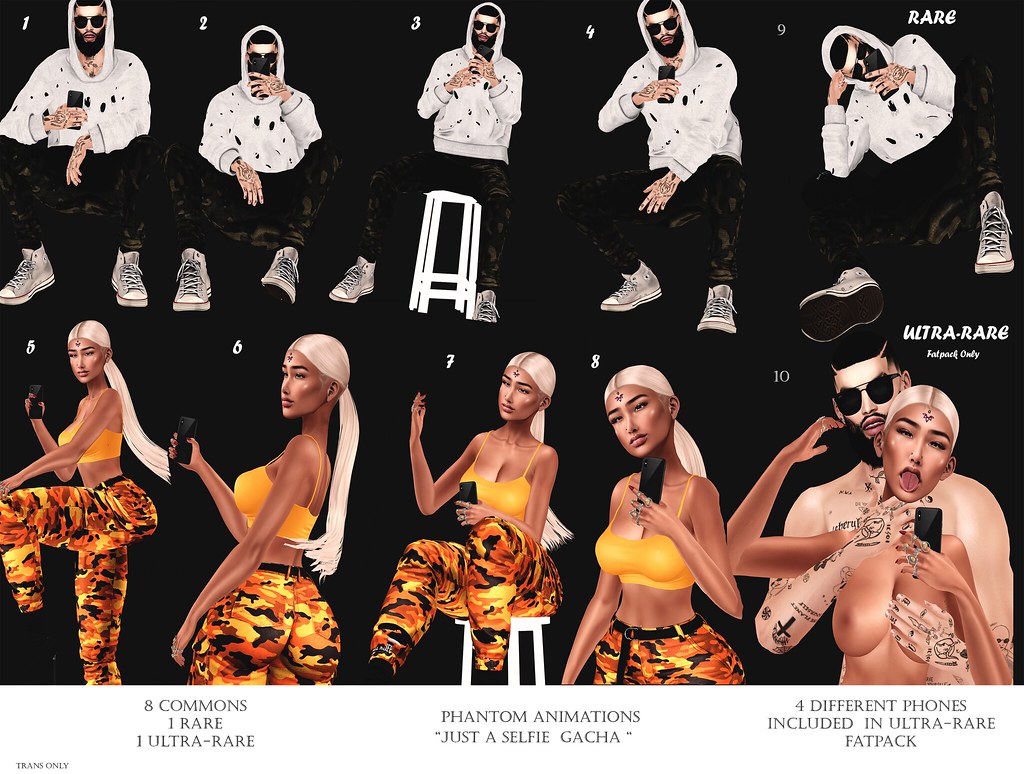 The Men Jail is set to open in just 4 days (on the 8th) and I’m already diving into the products that have come through to event bloggers. For this scene I picked out the “[Sweatband Set] MVP” by PBM (aka Pee Bee McMillan) as I was still wearing the Gianni body and this product was only fitted for Signature products it made the most sense to me and helped me put together a sporty type look.

Modulus has been known in the past for their clothing and skins and facial hairs, known more now for their cool hair and accessories…they are now trying their hand at something different. It was something the people asked for and they responded and have finally released body hair as a part of “What Men Want”. I figured I would try this out as most avi’s that go shirtless are usually waxed and do not have hair whatsoever. Putting this on made me feel a bit more like a normal guy instead of a magazine model.

It never surprises me when Chucky Hollak tries something new because I know that when he does that he’s going to ace it and it only makes me wonder what is next for him and the Modulus brand. You just never know what you might see hitting event shelves or his main store shelves.

During one of my stops to Hipster Men’s Event I couldn’t leave without purchasing one of the latest sneaker products from Dossier. I remember them before from their mesh beard days and it’s nice to see the brand branch out and try something different and even though I have similar pairs of shoes like these from other stores it still wouldn’t stop me because it’s sold completely as a FATPACK and also it has color options that my other shoes do not have. Everyone likes to think that only gals have shoe addictions well this fella does as well!

The Men’s Department opens it’s doors for the July round tomorrow and I was able to get my hands one on of the items from the event to aid in my look. As you can probably tell over the many blogs I’ve posted that I’m very big into having facial hair and without guessing an exact number I would say a good third or more of the posts on this site feature me having it as a part of my look. Birth is releasing a stubble called “Bristly Beard” and I am a big fan of it already from the moment I looked at my face and I have a feeling that this item will do well for guys that like just a bit of facial hair without having a lumberjack beard so this is definitely for that kind of person.

Hopefully now that all the fireworks are done I can go and relax and recharge my batteries so I can start fresh and get to work my look and flesh out ideas for my next blog post. I’m definitely also going to take a trip to The Men’s Department and get a better look at all the new items for sale at the event and see what ends up coming home with me. I hope everyone has had a great Independence Day as well as stayed cool and safe. That is all I have for this one but until our paths cross again,

onto the next conversation…

“This Hollywood won’t break me
I said, Hollywood don’t shine as bright
And I am not a supernova
Imploding into the night…
Into the night“

It’s not very often that I get a chance to feature something from one of the events that I love to hate and hate to love. That’s right, I finally have some items from the June round of The Arcade just in time to give you fellas a chance to get there before it closes on the 30th.

Genesis Lab has a machine there filled with various smoking accessories but also two Bento mesh heads, Flor and Ethan that are two of the RARE items inside the machine. The machine also consists of facial skins for the heads but does not come with body skins but fear not if you are the owner of any of the body appliers from Bold & Beauty then you can use them to match things up. Even if you don’t have any and you like the head and skin enough, you can find them HERE.

Normally I don’t go into much detail about what inspires the imagery of my photos and let the picture do the talking as I just provide information about the products I’m using and thoughts about them. However, I felt a bit more compelled to talk a little more about it. I was exploring the Rainy Alley sim that I used in my last work and found another spot I liked so well that I thought I’d come back again and do another scene. Sometimes I have an idea for a song to use as a soundtrack beforehand and other times I don’t, which is the case here. I started to listen to some tunes that I hadn’t thought about for a long time. Along came “Hollywood” by Lukas Rossi. It fit the scene because it tells a tale of a musician who’s coming down off of the rush of fame because their pride was more important than becoming a puppet to the politics of music and the suits that run the record companies. So the scene suggests that the person is happier playing in front of few or no one than to be compromised to be someone they are not just to play in arenas and large crowds.

To compliment the scene I went with leather pants made by Pee Bee McMillan, which I am wearing with my Gianni body. The package also comes with sizes for Adam, Aesthetic, SLink, Standard, and TMP. I believe they have also just updated them to also fit Belleza Jake as well. These leather pants are great for living out your rock n roll fantasies or if you’re big into the goth scene or just have that dark and brooding personality; it works for just about everything you could think of.

I also went and dug into my closet and accessorized the leather jeans with the “Boston” boots by A&D clothing. They definitely go well with them and add to overall rocker look that I was going for. Which I feel like I nailed down well enough.

The pose I used is not a marketplace item as the designer is no longer active but still has his items for sale on the MP. HISpose put out a set that goes well with a microphone stand called “HISmic” which was perfect for the setup I configured. I really liked this set and many of the others that HISpose created so it is much to my dismay that he no longer is active in creating poses. I can only wonder what HISpose would release now that we are in the age of bento?

Be sure to grab demos while you are at these stores and events which of course you can find transportation to down below in the full style credits. I look forward to bringing another look to you very soon but until then, stay stylish fellas!