I know that it has been a long while since I last posted but without going into really any detail, I’ll say that it was not something I planned on. From this point forward I’m going to just take things a day at a time and hopefully really get my appetite for creation back but it’s not something I can promise. Even just posting this today has had a little bit of struggle to it.

I wanted to at least see if I could bring myself to even post something and show a little love to Native Urban and Session Skins in the process and I hope I have not failed them as they’ve given me a wonderful opportunity to be able to showcase their work; even with me not cranking out things every day or every other day I am going to make sure that if there is any inspiration that comes I’ll make sure it shows up here and that it is the best it possibly can be.

Do I still love blogging? The answer is simply yes but sometimes life has a way of placing roadblocks up that deter you but eventually you get passed them and find a new normal…I’m not sure when I’ll find that new normal but I’m not going to force that either so anyone out there that’s shown me love and stuck with me since day one you have my loyalty always.

I’m going to encourage you to listen to the song that I’ve accompanied with this blog because it’s very meaningful and very beautiful and has helped pull a little bit of the magic I’ve lost out. Hope to see everyone again soon but until then look after yourselves and those you care about surrounding you. 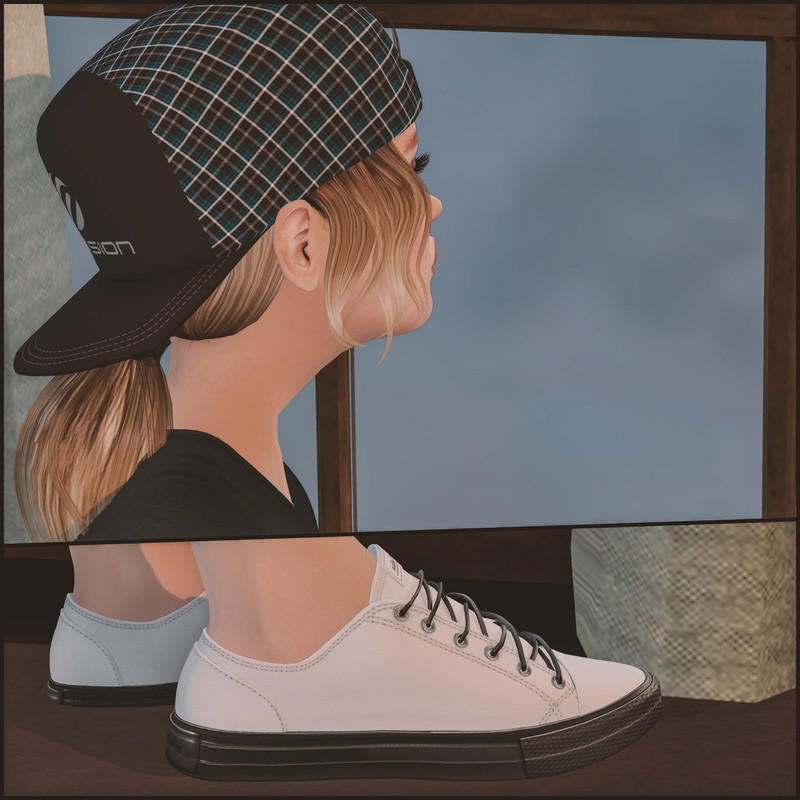 It’s Sunday and it has been a bit since my last post and while I was thinking of something to do I remembered that there was a fun little build by Salacity called “Zesty’s Dairy Bar” which is my first post for the brand since becoming part of their team. I thought it could be fun to do an ice cream themed photo but I didn’t have any single male ice cream photos and after a quick search upon the Marketplace I added “#Profile 5” from FRIMON Store which at one time was linked to an event and some other stuff. My idea was starting to look better and better.

With the scene and pose now in place all that needed to be done was the put my look together and get shooting. It’s been a long time since LV Designs has done a skin based on an actor from pop culture TV. One of the coolest I’ve seen was the Kit skin that was based on Game of Throne’s star, Kit Harrington. The latest in what I would personally call the star line is based off of Dacre Montgomery who is one of the actors on Stranger Things. I know I’ll catch flack for admitting to not having seen this but it’s on my list so cool those jets folks! It probably won’t win me any points to note that he has also played the role of Jason in the rebooted Power Rangers movie (which I thought was getting a sequel that all but seems dead now…oh well). The skin comes in two tones Pearl and Buttermilk (works with Stray Dog Tones 02 and 04 respectively). I thought it was kind of humorous because I think that his character also works in an Ice Cream Parlor or something so that’s a bit more humor added in along with “Weird” Al’s parody of Joan Jet’s “I Love Rock N Roll”. You can find this skin at The Men Jail until the 28th of August so still a few days to take a look and grab it if you want.

Lapointe & Bastchild have done it once again and have taken one of my favorite products and given it some new breath. Graphic tees are pretty much life as far as I concerned and even in the virtual world I can have some fun wearing the newly updated for 2019 “Santa Cruz T-Shirt Collection”. They’ve did some fine tuning for some of the male bodies as well as added some fun new designs to it. The shirt is compatible with Aesthetic, Belleza (Jake), Signature (Geralt/Gianni) and SLink Physique and can be found at the their main location which as always there’s a taxi for below.

A new event is also going to be on the horizon from Pale Girl Productions called “Ark” and I wanted to mention it now to make sure the name gets into people’s minds. If you like events like Skin Fair, Vintage Fair, Curves, and The Trunk Show then you might want to give “Ark” a chance as well. It’s going to feature some of the best designers on the grid and maybe some that are just waiting to show you what they are capable of. The theme revolves around animal themed items such as skins, clothing, furniture and accessories for the avatar. Since this is the first time the event is running I am unsure of what to expect but I like the idea of the challenge it poses so it’ll be exciting.

I will be making a post on it once the press packet is released and I’ll pass that on through the site so keep those eyes peeled ladies and gents!