She was so small
As she kissed me goodbye,
Her tears were beginning to show
And as she drove away on that rainy night
I begged her to go slow
If she heard I’ll never know

Twisted Sister, ♫Leader Of The Pack♫

I‘ve been thinking (which is dangerous most times) that Vintage Fair is a celebration of past fashion, furniture, styles and appearance. When I began to put this scene together I came up with the theme song for the post very quickly. While the original recording itself is vintage I decided to go a little closer to a cover version of “Leader Of The Pack” that is in my time frame. Twisted Sister’s version is certainly a classic in its own right and truly how often do I have a glam rock/metal bands to support my blogs?

I based the scene on the “50’s Diner” backdrop from Hopscotch as well as adding my own personal Jukebox from Standby Inc. (who sadly I have found is no longer creating new items…RIP). The backdrop comes furnished with really cool details (table, condiments, napkin holder and neon sign just to name a few). I like the addition of the scenescape of a street outside the diner if you’re taking pics from the inside but it’s also nice that you can snap them from the outside looking in as well for a variety of ways to style your scene.

Completing the scene I am making use of the SVP “Bamwen (Male)” pose pack which includes a seated one that allowed me to seat myself on the edge of the booth, allowing me to assume the role of a pretty cool biker dude. After saying that last bit I gave myself a laugh but I’m going to keep it in instead of redacting it because it may make someone reading laugh too.

I’m also going to include the vendors for the backdrop for added features as well as the poses to show the rest of the pack that isn’t visible here. Other key items from the scene is the “Tom” skin by Sessions Skins, the “Kojima Jeans” by Deadwool, “Godfrey Hair” by Modulus and “The High Line Biker Jacket” by Tori Torricelli. 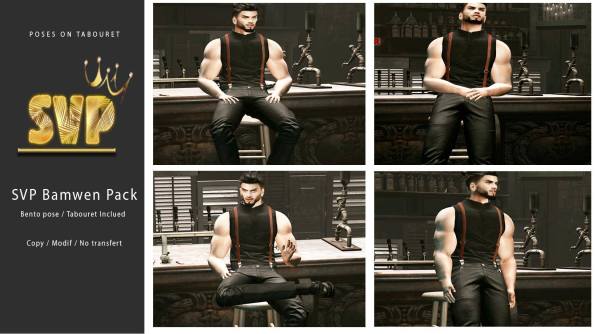 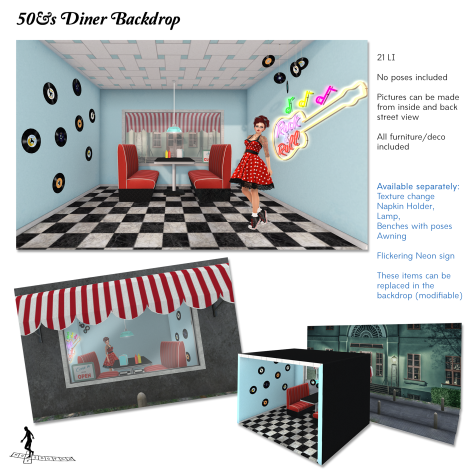 There’s something about America’s sweetheart and America’s bad boy. That juxtaposition is what everyone desires.
Machine Gun Kelly