You and me can make it anywhere
But for now, we can stay here for a while
‘Cause you know, I just wanna see you smile

Charlie Puth, ♫One Call Away♫

Wow, what can I say? Lately I have been on one of the best rolls when it comes to blogging then I have in a long time and I’m not sure what exactly it is; I can’t put my finger on it but I’m not going to look a gift horse in the mouth and all of those cliche sayings I could attribute to the reason why things have just clicked for me. Truthfully I am wondering if it is just the start of a new year and getting a fresh start or if there’s some cosmic reasoning for the creativity burst I have had…it could also be my excitement over returning to Pose Fair for at least the first two rounds this year. To me I think it’s more often the poses that help drive my ideas than it is the clothing but it seems that there is not such a thing as a virtual pose blog…well at least not yet anyway.

Also it could also be that I’ve truly hit upon some inspirational themes which most have been happy but if there’s someone that can tell me they are 100% all day every day and have never had a down moment then I want to know what they are doing because I certainly want to get on that train. For me I think that if I wasn’t allowed to feel any other emotions then I wouldn’t be half the person I am or will become. This site is more then just about virtual things, it’s about what it is to be human and all the thing that I may go through or what someone close to me might be experiencing.

One of the reasons why I chose the pose I did for this entry is because of the phone prop that came with it because it automatically helped me remember that one of the songs I wanted to use as a soundtrack was Charlie Puth’s “One Call Away”. It’s a testament to being an emotional superhero that doesn’t need a cape and being there for someone close (mostly likely a spouse or significant other). I think that if one of the people I loved needed to talk no matter when it was in the day that I am going to be there to support them no matter what.

I used to often wonder if I was the kind of person that did things for people for what it could get me in return all because of one terrible person I had in my life. They made me feel that way and I spent a long time worrying about what people thought but as I write this I’ve clearly realized that I know without a doubt that I do the things I do out of love.

Like a broken record I am probably going to talk about how much there is at Pose Fair until the end of the month when the January round ends but when what I say is based in truth it is worth repeating if it means that I can inspire someone to visit the event to find something to create a moment of their own that others will then see and the cycle continues.

MERCH is a pose store whose name I’ve heard floating around for a while and not only by fellow bloggers but also by their pose creating peers as a quality place to get poses from and that says a lot if someone in the same profession has nice things to say about another person’s work then it is worth looking into. Their pose set “Von” is what I am using for the photo and as I said above I chose it because of the phone prop that came with it.

Not all of the poses use the phone but most do which I thought would also be good information to pass along to the public along with also adding the pose key as well to see what the other poses in the set look like. I think that would be something I’d want to see on a blog if I were looking at one and wanting all the information I could get about a product. 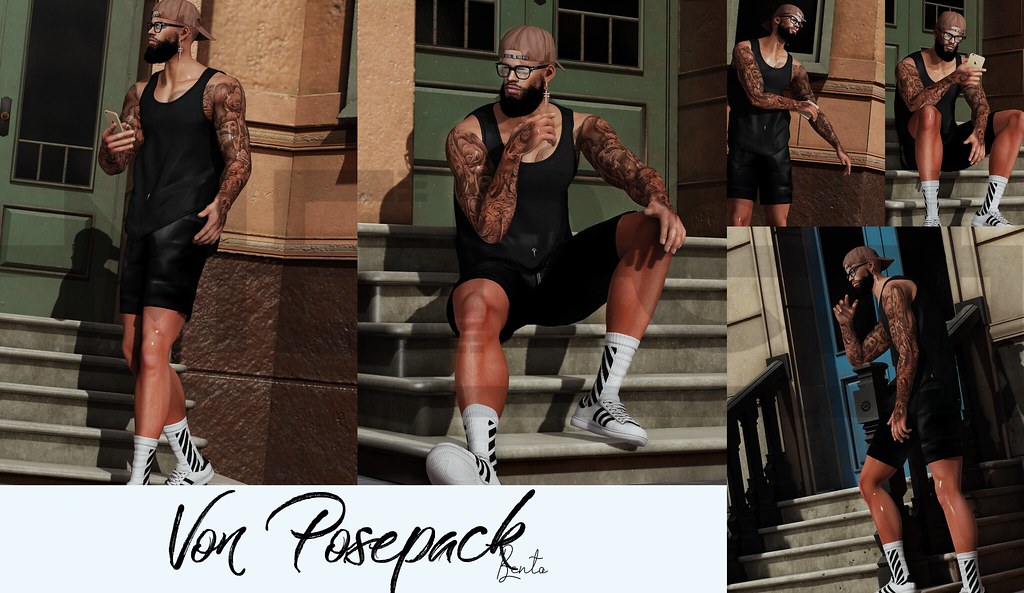 Fire escapes in winter can be pretty chilly so it made lots of sense for me to put on the “Camron Over Coat” by HEVO which is a recent release from the November/December round of Men Only Monthly that I remember picking up right before it closed for that round. I struggled with trying to pick between coat colors so in the end the price was well worth going all-in and purchasing the FATPACK.

Usually I tend to wear black coats because it’s somewhat of a personal trademark for me which is why I stepped out of one of my norms by wearing the brown version of the coat and still managed to get my monotone colors with how I colored the sweatshirt and shirt underneath that. What can I say? I told you it was cold so I bundled up so my pixels didn’t freeze!

On that note I think it is best to end this post at a good spot by leaving the entire credits and be sure to remember if there is something that isn’t listed check the above page with the list of the items that I wear currently. That is the go to reference for anything you did not see listed in credits and until I’m wearing something different that is where my permanent items reside.

Plenty more things to do and my ideas are through the roof right now so time to go cook up something new but until then keep those conversations going!